I’ve been a fan of She Can. She Did. for a while now, so when founder Fiona Grayson announced the Midweek Mingle it was pretty much a sure thing that I’d be there with bells on (and a large, uncomfortable backpack apparently…not networking-friendly!). Her mission was to “bring together young female founders and aspiring entrepreneurs for a night of honest chit chat about the realities of launching a business”, and the panel of founders she put together was all the more reason to grab my ticket as early as possible: Olivia Wollenberg of Livia’s Kitchen, Alice Audley of Blogosphere Magazine, Safia Shakarchi and Katie Brigstock of Cook & Baker, and Natalia Talkowska of Doodleledo and Natalka Design. There were far too many takeaways from each speaker to write about in their entirety, but here are a few things I learned:

Natalia Talkowska: “I have a picture on my wall that says “Shut up and deal with it”. This quote is always really good for me when I have the completely wrong attitude…I feel so grateful that I can do what I like doing and it comes easily to me. I don’t take it for granted.”

Natalia was immediately likeable and downright hilarious to listen to on the panel. From her imaginary conversation with her future grandchild about everything she’s achieved, to her story about the time a colleague walked out of a meeting room because of her negative moan-a-thon, she revealed the struggles she has faced and how she’s found the humour in it all regardless. She’s clearly a woman with a unique talent that’s taken her to lots of interesting places and helped her meet amazing people, and as she mentioned, she doesn’t take it for granted. Her advice to the audience: when running a business, yes things will go badly, and yes you will feel anxious and awkward at times, but there’s always a bigger lesson to learn. With not one but two successful businesses keeping her busy, Natalia is certainly an entrepreneur to watch.

Cook & Baker: “We didn’t intend to start a business. It was something we really wanted to do and we wanted to have fun with. We loved having parties and hosting events, so we thought why not!”

Safia and Katie of Cook & Baker became instant idols for any best friend duos in the room looking to start a business together. This pair of supper club extraordinaires told their story so modestly, like they still couldn’t believe how well their business has been going, but all you have to do is visit their website to see that they are the real deal. Their honest account of starting a business together, suffering from burnout and running the supper clubs as a second job for each of them was so insightful for any friends who were thinking about working on a project together, and also for anyone in the room who wanted to join the food industry. Their best advice from the panel was to start connecting with people, as connections snowball and grow into bigger opportunities. With a business that’s based on connections and great food, it’s hard to see how this power couple could fail.

Olivia Wollenberg: “I didn’t have a planning period. I’m very much a risk taker by nature, I had this idea and I thought that there was a gap in the market, but who knows how long there will be a gap…I needed to move quickly and do this bigger and better than anyone else.”

Livia’s Kitchen went from Olivia literally making tasty, healthy treats in her parents’ kitchen, to a beautifully packaged product on the shelves of high-end stores such as Selfridges and Harvey Nichols, all in a fantastically short space of time. It’s clear that she has a strong follow-through when it comes to implementing her ideas, telling the audience about how she had the light bulb moment and started working on recipes the next day. Since then she estimates sleeping no more than 3 hours a night, but assures that it’s the good kind of busy. She’s incredibly passionate about her brand, and thinks that any aspiring entrepreneurs ought to believe in their product in the same way, being able to “talk about it to death”. Olivia is clearly incredibly knowledgeable about her business and industry, but maintains that she’s still always learning, and thinks that if you have passion and are willing to work really hard there’s no reason that you shouldn’t go for it.

Alice’s story of starting Blogosphere Magazine on her own while juggling a full-time job writing for a newspaper was impressive, and understandably the audience felt exhausted for her. Late nights of calling Australia to sell advertising because they were the only ones awake turned into working with famous bloggers like Estée Lalonde and Lauren Juliff, who were among those initially willing to take a chance on Alice’s venture and help turn the magazine into a huge success. One of her key pieces of advice for expanding your business is to hire team members who are just as passionate about the brand as you are, and who share your vision. The Blogosphere Magazine team is surprisingly small, and they gel so well together while working toward the same goals alongside Alice with equal drive. Another nugget of wisdom she shared: if you’re not good at something, for example numbers and finances, don’t let that turn into a reason not to start your business. Just start, and hire a bookkeeper to help!

Fiona Grayson: Founder of She Can. She Did.

I couldn’t end without mentioning a takeaway from the organiser of the Midweek Mingle herself. Not only was Fi dressed to the nines in a pink suit that made her stand out in the crowd of budding entrepreneurs, but her introduction to the event was warm, welcoming, inspiring and hilariously relatable, featuring a moment where a “dry lip thing” got the better of her during her talk (haven’t we all been there?!). Her light bulb moment came, she told us, on a work trip to Boston where she was feeling uninspired by both her job role and the lack of in-depth interviews with entrepreneurs searchable online. She began the site as a project to help shine a light on some of the most inspiring young female entrepreneurs of the moment, but couldn’t have imagined that it would bring her to her first London event, which I can confirm was a tremendous success and a lot of fun! Her takeaway was that no matter how strange your idea may seem, you should always be willing to give it a try and see where it takes you.

I’ll be keeping my eyes peeled for more She Can. She Did. events in future, and hope to see some of you there! 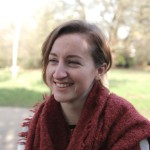 Caitlin is a freelance writer usually based in London, a keen traveller, and an avid snow globe collector. She regularly writes copy and content for both blogs and brands, including Time Out London, and founded Desk Life Project in 2017 to create a community of freelancers and entrepreneurs like herself. You can follow her updates and get in touch on Instagram @caitmca.

It’s time to stop scrolling through what Sally ate yesterday, and start seeing motivational, inspiring content on your feed, starting with the Desk Life FB page.

DESK LIFE IN YOUR INBOX